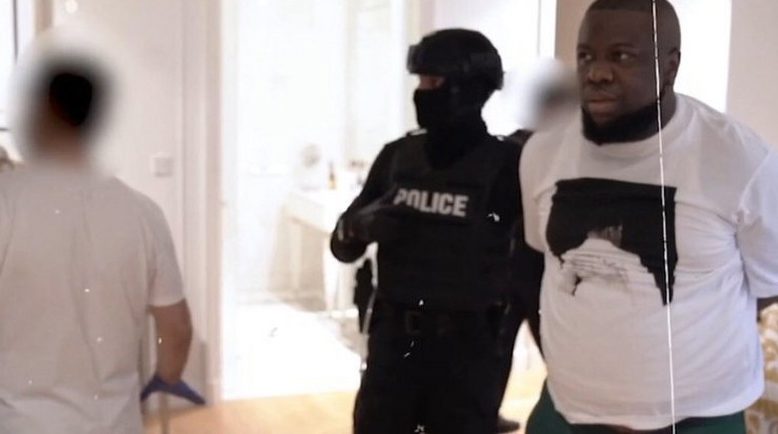 Dubai police had been tracking Hushpuppi and his gang members for months and took out raids simultaneously as the suspects slept in their Dubai residence. A team of dedicated and highly trained Dubai Police monitored Hushpuppi and his gang’s social media accounts to known their movements.

Hushpuppi was arrested on multiple fraud charges for crimes committed in different parts of the world. Dubai police say he and his gang members hacked corporate email accounts and sent fake messages to unsuspecting clients in order to defraud them. According to Dubia Police, he and his gang members conspired to defraud people for a total sum of 1.6 billion dirham (NGN168 billion).

During the raid, police seized 21 personal computers, 47 smartphones, 15 flash drives and 5 hard disks. In total a 150 million Dirhams worth of seized items.cHushpuppi and his gang were alleged to have scammed a total of 1,926,400 victims worldwide.

Dubai police handed Hushpuppi to the FBI and extradited him to the United States where he will face charges and be prosecuted. The FBI thanked Dubai Police for apprehending him and his gang.

“The Director of the Federal Bureau of Investigation (FBI), Christopher Wray has praised the exceptional efforts exerted by the United Arab Emirate, represented by the Dubai Police General HQ, in combating transnational organised cybercrime including the recent arrest of Raymond Igbalode Abbas, known as “Hushpuppi” and Olalekan Jacob Ponle aka “Woodberry” who were taken down in operation “Fox Hunt 2”.

“Mr Wray also extended his appreciations to Dubai Police for their cooperation in extraditing the wanted criminals, who committed money-laundering and multiple cybercrimes, to the United States.”

Hushpuppi arrived in the US on Thursday, July 2 2020 and made an initial court appearance in a Chicago court. He will be transferred to Los Angeles in the coming weeks.

“Ramon Olorunwa Abbas, 37, a.k.a. “Ray Hushpuppi” and “Hush,” a Nigerian national, arrived in Chicago Thursday evening after being expelled from the United Arab Emirates (UAE),” states a complaint on the US Department of Justice website. “Abbas made his initial U.S. court appearance this morning in Chicago, and he is expected to be transferred to Los Angeles in the coming weeks.”

“Abbas was arrested last month by UAE law enforcement officials. FBI special agents earlier this week obtained custody of Abbas and brought him to the United States to face a charge of conspiring to engage in money laundering that is alleged in a criminal complaint filed on June 25 by federal prosecutors in Los Angeles.”

In what is one of the biggest cybercrimes in modern times, the complaint filed by the US Department of justice states Hushpuppi and his gangs attempted to defraud an English Premier League club of $124 million.

“Abbas and others further conspired to launder hundreds of millions of dollars from other fraudulent schemes and computer intrusions, including one scheme to steal £100 million (approximately $124 million) from an English Premier League soccer club, the complaint alleges.”

If convicted, Hushpuppi faces maximum jail time of 20 years in a federal prison in the United States.